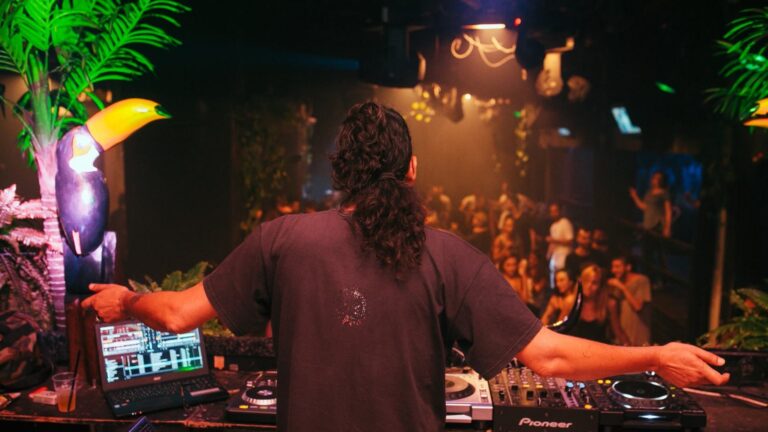 I start playing music as a rock DJ in 1985. Around 1993 i jumped to Goa Trance. Until 1996 i was fully on vinyls (totally 11 years). Then, i discovered (and loved) the DAT players and i used them until the end of 2003. After that, for various reasons, i had to use the thing that i never liked… the CD (because i found that they sound too “cold”, compare to vinyl or DAT). This lasts until 2008, where i start using software.

Until 2011 i was still using CD on parties, but only because i didn’t had a laptop yet (don’t be surprised, we are not all rich or having a steady job!). From 2011 i only use software (though i always carry few CD too, just in case). I will not mention here the superiority of a true high quality audio file (48KHz/24bit). This is obvious. For me, the whole thing of playing music was, (and still is) a matter of constant evolution and an effort to take creativity and perfection to another level!

As i am a musician (and a bit of a philosopher too), since the DAT days i use all that info to DJing. I always make a list depending on Key notes and their harmonics. As i also took some studies on this, i know what is Harmony and what is Disharmony, for example when you play a track on D minor and your next track is on G# this could be a cacophony (though this depends on the “nature” of each track)! I combine the above, with the Chakra theory and some Pythagorean and Alchemical rules concerning key notes and their correspondences.

All those things need A LOT of work! At the end, my list will be ready for the most perfect possible result. But, from that time and further, it is the time for the feeling and inspiration (on the already “perfected” lists).

My advice: NEVER leave the good fun of the people to luck! Especially if you know that there is always a possibility that some of them are on a “trip”! This is top respect for my audience as i see it. In a more philosophical way, my goal is not to do what i want (which is not freedom but ego), but to do what is BEST! I try to do this in every aspect of my life.

Now, lets go back to the lists. My lists, are just …HUGE! Always make them to have around 100 tracks. From those tracks (which are all compatible with the mood of the day), i will choose 17 to 22 for the final set (usually a 2 hours set). At this point (and never before!), comes the feeling, the inspiration and the most important thing; the situation of the people in the dance floor! At this point i will choose on-the-fly, the best possible track, as my feeling guides me!

From my experience I’ve learn that this combination above makes people happy and satisfy, even if they may not like some tracks! I even make my Mixcloud mixes under the same rules, that’s why i only post a few there. It could be very easy to have 300 or 400 mixes, but this is not what i do. Only the best of the best can go there! (…and anywhere else, as a matter of fact).

For me, anyone who claim to be a true dance-floor Alchemist should know and use some of the above! The reason that we have so many DJ and most of them are medium to bad (thus we listen the same and the same again), is that they do not have a proper musical education (at least!). Of course, also exists the natural talents and i bow in respect to them, but they are exceptions.

A very important fact for me, is that instead wasting time to find what is the next track, or just watching the people (or even pretend to dance, as many do), i have my hands and mind free to make a full show! By using samples and combine them to tracks, by using FX on tracks (delays, filters, phasers, reverb), even to have the chance to plug a synth and play live with the track! (though this last thing i only made it at home, so far).

Also, i can jump to the people, dance with them, feel them, be together with them and never be a “distant star” 2 meters high and away from them (or even worst, “protected” from them, by some fat muscle non-smiling guys with sunglasses always on, as if i was a president! WTF?). That’s why i call this procedure a Live DJ mix!

I remember, back in the “DAT days”, things were much harder, because some of us who always seek perfection, we used a text book and mathematics to make the mix as best as possible! This was also made by lists (but those lists where in our heads instead of Traktor or Virtual DJ). It took days and days to calculate the BPM, to find out the Key note, to count at which second the beat starts, and even more…

PS-1: This is my point of view, based on 35 years of experience. Does not meant to underestimate the other methods of mixing, but to prove wrong the false contention that claims that “software is easy“! Well… it is how you use it! 🙂

PS-2: The purpose of this note, is also to share some knowledge and experience, so the world can have even better DJ. People who will go beyond the usual technical knowledge, thus we all can enjoy much better experience on Festivals and parties. I hope i covered you enough (though i just reveal some of my secrets here…).

Back to top
We use cookies on our website to give you the most relevant experience by remembering your preferences and repeat visits. By clicking “Accept All”, you consent to the use of ALL the cookies. However, you may visit "Cookie Settings" to provide a controlled consent.
Cookie Settings Read More Accept All Reject All
Manage consent

This website uses cookies to improve your experience while you navigate through the website. Out of these, the cookies that are categorized as necessary are stored on your browser as they are essential for the working of basic functionalities of the website. We also use third-party cookies that help us analyze and understand how you use this website. These cookies will be stored in your browser only with your consent. You also have the option to opt-out of these cookies. But opting out of some of these cookies may affect your browsing experience.
Necessary Always Enabled
Necessary cookies are absolutely essential for the website to function properly. These cookies ensure basic functionalities and security features of the website, anonymously.
Functional
Functional cookies help to perform certain functionalities like sharing the content of the website on social media platforms, collect feedbacks, and other third-party features.
Performance
Performance cookies are used to understand and analyze the key performance indexes of the website which helps in delivering a better user experience for the visitors.
Analytics
Analytical cookies are used to understand how visitors interact with the website. These cookies help provide information on metrics the number of visitors, bounce rate, traffic source, etc.
Advertisement
Advertisement cookies are used to provide visitors with relevant ads and marketing campaigns. These cookies track visitors across websites and collect information to provide customized ads.
Others
Other uncategorized cookies are those that are being analyzed and have not been classified into a category as yet.
SAVE & ACCEPT